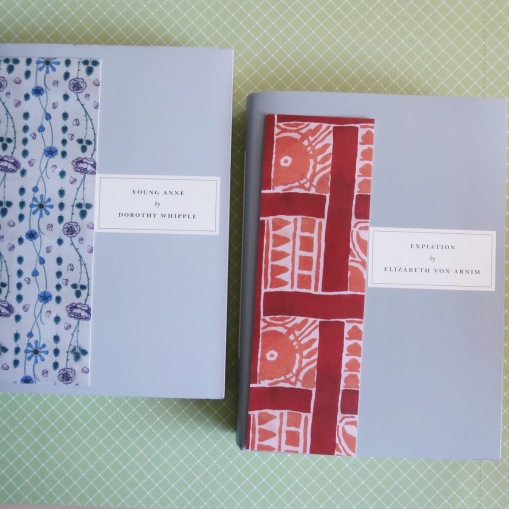 Expiation is the seventh title by Elizabeth Von Arnim that I’ve read. Published in 1929, it is written with Von Arnim’s typical humor and sharp observations of human nature. It begins with the death of Milly’s husband in a street car accident. A fairly well-off man, it comes as quite a shock when he leaves only 1,000 pounds to his beloved wife and the rest of his wealth to a home for wayward women. But it is not a shock to Milly. For she has “sinned” and she now knows that her husband was aware of it and has decided to punish her for it. His tight-knit family, the Botts, now have to decide how to think of this strange decision: think the worst of Milly (which most of the women do) or think the worst of her husband (which most of the men do). Unfortunately, their thoughts mean everything as Milly is now not only poor but homeless. It is up to the Botts to absorb her into their lives but how do they do this and maintain their standing in society? Milly does try to find her own way, to break from the Botts and make it on her terms but they ultimately hold her fate in their hands.

This book is an interesting exploration of polite society and how any deviation from the code of polite society causes turmoil and insecurity among its members. The Bott family nearly implodes with speculation and exaggerated fear of Milly and what they think she has done. Von Arnim is definitely damning this attitude, but attempts to do it with a light touch. However, though this novel is very funny in places, I felt a mournfulness to it that was quite heavy. I think it is sad on many levels. Sad for Milly, for her lack of choice, sad for the Bott women who can’t accept Milly out of fear, sad for the Bott men who want to help Milly but can’t risk being charitable to a sinner, sad for women in general for their lives being so strictly prescribed. Does Milly receive expiation? Is it something that is even possible or necessary? I will leave that for you to discover, but I will say that I left this novel with such relief.

Though not my favorite of Von Arnim’s books, Expiation is a novel that has left me thinking and has made me see that her books are so much more political and concerned with social justice (especially for women) then I have realized.

I read Expiation as part of the Mini Persephone Readathon a couple of weekends ago. I intended to also finish Young Anne by Dorothy Whipple that weekend, but I am a slow reader and it didn’t happen. Young Anne will have to wait for another day.